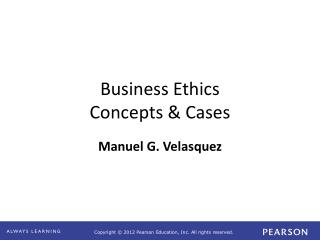 Business Ethics Concepts & Cases. Manuel G. Velasquez. Chapter One. Basic Principles: Ethics and Business. Ethics and Morality. Ethics is the study of morality. Morality = The standards that an individual or a group has about what is right and wrong, or good and evil.

Business Ethics - . what are ethics??. -standards of right and wrong that prescribe what humans ought to do, usually in

AICP Ethics - . if the ethics committee determines that the ethics officer has demonstrated that the rules of conduct

Business Ethics - . the managerial approach to business ethics. roadmap. what is the role of managers in corporate

Concepts and Theories of Ethics - . a module in the micro-ecourse: introduction to engineering ethics prepared by: dr.

Business Ethics - . business ethics . rules or standards governing the conduct of a business moral code – what is

Writing and Analyzing Ethics Cases in Business - . william frey admi 6005. the key points. a case taxonomy how to choose

Ethics - . bell ringer. what are business ethics? what is the goal of business? if something helps your business, but

INTRODUCTION TO BUSINESS ETHICS - . paul a.b. pajo jr. ii. why be ethical?. what is ethics, and why is it important to