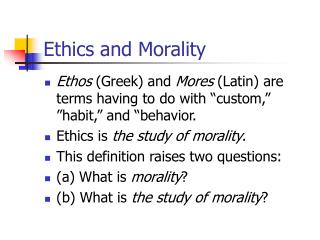 Competence as our Cornerstone: Ethics in Psychology Training - Association of psychology postdoctoral and internship

Feminist Ethics - . the handmaid’s duty. feminist ethics. first, what is feminism? according to brannigan, p.179, its

Ethics: Why They Are Important, Why We Hate to Talk About Them, and What To Do About Them - . nasact november 3, 2004

Immanuel Kant and the Ethics of Duty - . overview. part i. the ethics of duty part ii. universalizability and the

Christian Ethics - . ethics. right. wrong. ethics. ta etheka , the customary, the approved but- accepted by whom? on