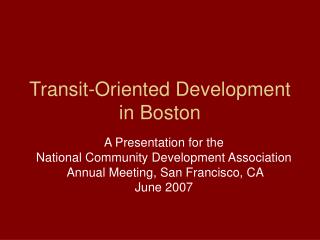 Transit Oriented Development in Practice - . tod down under: the mill albion. professor phil charles | centre for

Transit-Oriented Development (TOD) - . an overview. definition of tod. what is tod?. tod is a synergism between land use

Stavanger – optimal transit oriented development? - . methods used for the localisation of stops along a proposed