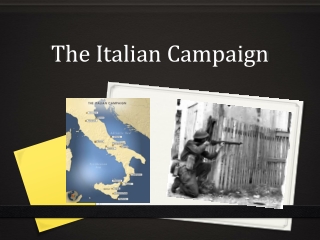 The Italian Campaign. Background. German and Russian Troops German troops faced disaster in Russia. They were unable to handle the freezing Russian weather. The German army surrendered in 1943. Italian Renaissance - . 1300-1600. italian states. the civilization of the italian renaissance was urban, centered on

Getting a Campaign off the Ground: Campaign 101 - . united way of the wine country june, 2010. what does it mean to

Potential Italian contributions to WFI - . l. piro, iaps-rome on behalf of the athena italian team. the rationale. t he

ITALIAN RECIPES - . italian recipes. italian cuisine is mostly based on the dietary pattern of the meditteranean diet

Learn Italian for beginners - Italian will help you navigate the streets of rome on your next trip abroad. italian is the