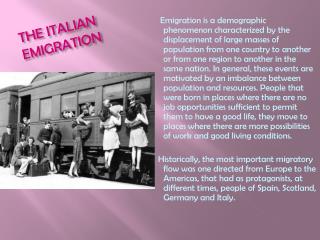 Emigration from Ukraine - . and czech republic. 2. migration between ukraine and cis and baltic states in 1990-2005 ,

The Economic Consequences of Emigration - . potential positive effects. a. gains to the emigrant. 1. some examples of

Because of the increasing emigration, - The remittances of the migrants were an important source of foreign

Emigration in SC - . standard 5.2. what is emigrate?. emigrate means that people moved from our state to other parts of

Emigration to Australia - . australia. people who left for australia were under no illusion that this was for life. the

Emigration from Ukraine - . and czech republic. 2. migration between ukraine and cis and baltic states in 1990-2005 , th.

Video about emigration - . as regarding france we know that people went to the districts of meurte -et- moselle and

Emigration to India - . india. sir walter scott stated, “we must send our younger sons as we send our black cattle to

The Effects of Emigration on Mexico - . by kate harris 12/13/2011. immigration vs. emigration. you immigrate to a