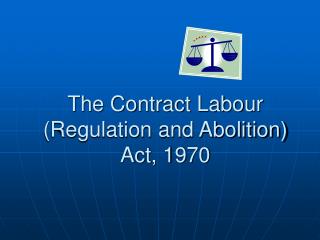 The Contract Labour (Regulation and Abolition) Act, 1970. Objectives. To regulate employment of contract Labour and their terms and conditions Where it is found necessary, to abolish contract labour. Case Law 1. Standard Vacuum Refining Company V/s its Workmen 1960 II LLJ 233

Conservative Movements From the Prohibition to the Moral Majority - . lecture 4 may 19. after the civil war. abolition of

Successes and Failures of the Abolition Movement - . successes of the abolition

CSR and Labour Standards - . lund 2014. basic notions. csr is a notion developed to overcome gaps in regulation at

The Abolition Movement in the US - . growing abolition movement. by the 1830s, opposition to slavery is beginning to

Describe the lives of enslaved and free African Americans in the 1800s. - How did reformers try to help enslaved people?.

The Politics of the Civil War - . the fight for abolition. some northerners realized that winning the war would not be

The Anti-Slavery Movement - . 8.3. objectives. describe the lives of enslaved and free african americans in the 1800s

Abolition - . if the union must be dissolved slavery is precisely the question upon which it ought to break john quincy