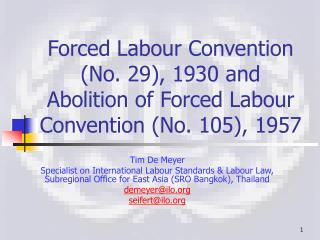 THE INTERNATIONAL LABOUR ORGANIZATION AND ITS STANDARD SYSTEM - . the international labour organization. international

THE INTERNATIONAL LABOUR STANDARDS SYSTEM - . international labour organization. was created in 1919. is a united nations

Abolition - . if the union must be dissolved slavery is precisely the question upon which it ought to break john quincy

Procedures for International Labour Standards and Discussions at the Conference - . actrav-turin. process of The organisation of labour inspection in France