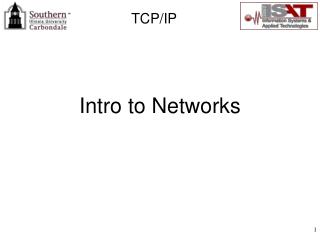 Intro to Networks TCP / IP REFERENCE MODEL The TCP/IP model was the basis for the earliest computer network, the ARPANET. Now the standard model for the successor to ARPANET, the Internet. It is a less well-defined model than the OSI model. A very flexible architecture.

Introduction to Networks - . use networked computers to: create or download catalog records for our holdings create and