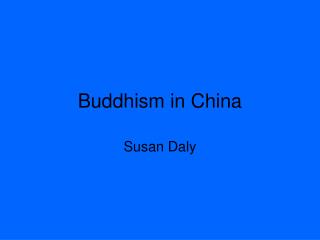 Daoism and Buddhism in China - . section 11-3. standards. h-ss 6.3.3 know about the life of confucius and the fundamental

DBQ Buddhism in China Body Paragraph - . body paragraph. 1. set up the argument (should be first and last sentence of the

Women in Buddhism - . mahapajapati gotami. was the buddha’s aunt and foster mother was the first to ask for ordination

Buddhism Buddhism was brought to Japan from China through Korea beginning in the 6 th century. - Buddhism buddhism was