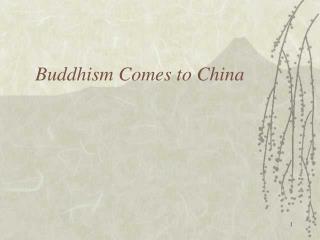 Geography and Early China - . the big idea chinese civilization began with the shang dynasty along the huang he. main Buddhism &amp; the Axial Age - . buddhism originated in india at the end of the 6th century bce. this period is

Lesson 5: The Spread of Buddhism into China - Lesson questions: what happened in china after the fall of the han

Chinese Philosophies - . the teachings of confucius, buddha and lao tze. confucius 551 - 470 b.c. confucianism is a

Imperial China and the spread of Buddhism Tang Dynasty and Sung (AKA Song) Dynasty - . both political leaders used state

F ew words about Korean Buddhism - . basic buddhism. buddha: gotama sittharta he was born in a aristocratical republic in

Chapter 14 China Section 1 China Reunifies - . entry task. using the map of china… what are the natural barriers? where

Buddhism on the Silk Roads: Xuan Zang 玄 奘 and the Transformation of Chinese Buddhism Dialogues of Civilization