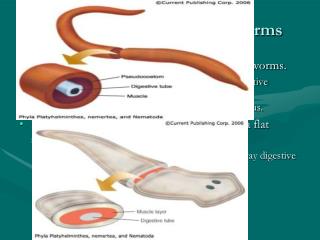 Characteristics of Simple Worms. Phylum Platyhelminthes is made up of flat worms. They have a flattened tube of muscle, simple digestive system, a single opening that serves as both mouth and anus. Phylum Nemertea are more complex with a flat shape.