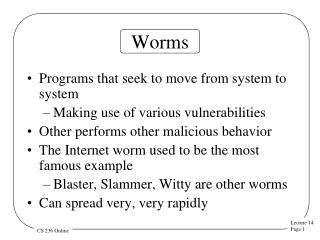 Worms. Programs that seek to move from system to system Making use of various vulnerabilities Other performs other malicious behavior The Internet worm used to be the most famous example Blaster, Slammer, Witty are other worms Can spread very, very rapidly. The Internet Worm. Born 19 Aug 1964 - Disclaimer: the contents herein are presented as is without copy write protection, it probably

TCEA Workshop 6898: Phishing for Worms – Why is my Computer so Slow? - . a brief look at some annoying and sometimes

Ch.9 Sponges, Cnidarians, and Worms - . what is an animal, animal symmetry, and sponges and cnidarians. sec 1 what is an