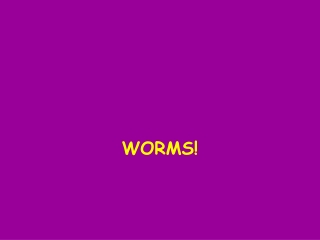 WORMS!. 1.Part One – Unsegmented Worms Their bodies are not divided into specialized segments. There are two phyla: Platyhelminthes are the flatworms Nematoda are the roundworms. 2. Phylum Platyhelminthes They are the simplest animal with bilateral symmetry. L3: 3.2 - . “determining pulse rate of blackworm”. question:. describe the flow of blood through a california

Phishing with Worms - Twenty years of digital threats—what have we learned and where are we now?. phishing with worms.

Worms - . worms have rounded or flattened bodies, usually without arms or legs. some worms live in the water, and some

Worms and Mollusks - Ms. moore 2/11/13. worms and mollusks. what is a flatworm?. phylum: platyhelminthes flatworms are

California Black Worms Nikki Metzger - . question:. do california black worms regenerate faster in the light or in the

Can O Worms - . “thinking biblically in a secular

Segmented Worms - . by : nathaniel and cal. what does my invertebrate look like? . usually 12 inches looks like pink

Stamping out worms and other Internet pests - . miguel castro microsoft research. the challenge. worms are bad worms can

PLATYHELMINTHES - . by:gabe landers &amp; carson kero. species of flat worms. there are about 20,000 species of the