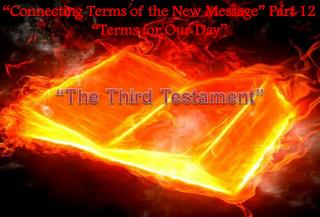 “Connecting Terms of the New Message” Part 12 “Terms for Our Day”. II KINGS 2:8 And Elijah took his mantle, and wrapped it together, and smote the waters , and they were divided hither and thither, so that they two went over on dry ground .

Key Points - . name the three parts of the cranium synonym for dermal bone? what does this mean in terms of development?

P Terms - . what’s the term?. #1) from the latin term meaning “a country-dweller”; within the christian world, a