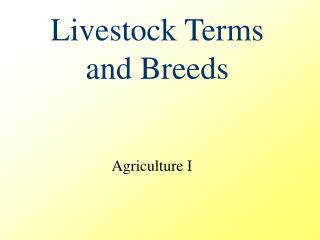 Livestock Terms and Breeds. Agriculture I. General Livestock Terms. Barren – not capable of producing offspring Cull – to eliminate one or more animals from the breeding herd or flock Composite breed – a breed that has been formed by crossing 2 or more breeds (synthetic breed)

The breeds of pigs - . by:charles huelsenbeck. your being put in charge of a farm that is looking into breeding swine to

Selective Breeding - . warm up. each of these dogs is a member of the same species. why is there so much variation within

DOMESTICATION AND IMPORTANCE OF LIVESTOCK - . livestock defined:. the term livestock is normally defined as animals

Emerging Infectious Disease, Zoonoses and the Human-Livestock-Wildlife Health Interface - . a primer for

Breeds of Beef Cattle - By michael teague classifications british- from the english isles. american- any breed having

Domestication and Importance of Livestock - . animal science 1 unit 1. objectives. discuss briefly the history of the