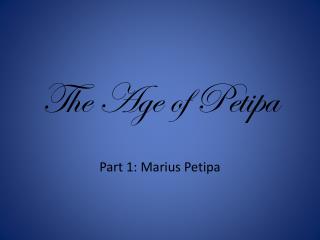 The Age of - . exploration and expansion for thousands of years the major civilizations of the world thrived in

THE MODERN AGE. THE AGE OF ANXIETY - . new view of man and the

The Age of Discovery or The Age of Exploration - . early 15 th century until the 17 th century. europeans looking for

The Age of Enlightenment aka The Age of Reason - . 18 th century thought. age of reason aka the enlightenment. 1700s

Age of Faith and the Age of Reason - . puritans and the founding fathers believers become thinkers. power vocab. age of

The Age of Discovery - The meeting of three worlds questions what was the world like before columbus? why did europeans

The Age of Reason - . or the revolutionary period in american literature… (the late 1700s). focus on “reason”. by

The Age of Jackson - . “old hickory”. bell ringer: discussion questions. how much of a disparity exists between poor

The Age of Imperialism - . 1875-1914 red-coated british soldiers stand at attention around a royal pavilion during a

THE AGE OF REASON - . the revolutionary period. science in the new world. the invasion of smallpox cotton mather, the

The Age of Exploration - . the historical setting for exploration. europe wanted trade world divided into independent

The Age of Anxiety - . ap world history. europe ’ ’ s mood after the great war. post-wwi europe. decade can be

The Age of Enlightenment - . a cultural movement. what differences do you see between these pictures ?. what is a