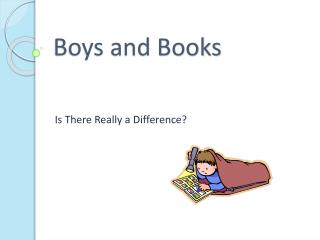 Boys and Books. Is There Really a Difference?. The Eye Roll. Up until past few years, boys have been “ignored” in Book World. Why? Perceptions and Stereotypes: …Boys aren’t (often) “ideal” reader Recent years, Renewed interest. Boys’ Thoughts.

RAISING BOYS’ ACHIEVEMENT Gary Wilson - . how parents can help www.garywilsonraisingboysachievement.com. to begin with

MR MEN BOOKS - Acorns primary school's. mr men books. the children in years 3-6 made their own mr men books for the

Check Out These Books! - . by jillisa student. the aurora county all-stars by deborah

Family book club : How to inspire your kids to become lifelong readers - . show me a family of readers and i will show

Gender Differences in Education - . what books do boys and girls both want to read?. do boys read girls’ books?.

ANDREW CLEMENTS - . andrew clements was a teacher for seven years after college. he started getting into kids books by

The Importance of Books and Reading for Gifted Children - . books are an ideal way to respond to characteristics and

Making a Difference: The 2006 “Guys Read” Book Club Summer Program for Boys Hennepin County Library - . a report of a

Books for Boys: A New Look at How to Bring Boys Into the World of Readers - . pam allyn executive director, litlife