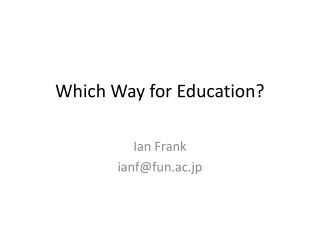 Which Way for Education? Which Way for Education?. Ian Frank ianf@fun.ac.jp. A Real-World Test. Imagine you are a bouncer in a night club. beer-drinker coke-drinker 25 year old 16 year old. Rule: “ If someone is drinking beer, they must be 18 or over ”. A Logic Test.

Which Way for Education?

Education and Action for a Sustainable Future - . debra rowe, ph.d . president u.s. partnership for education for

Norwegian Directors of Education WELCOME TO UNESCO - . education. challenges for education in the global context:

Education and Technology: K -12 - . issues in canadian public education in the ‘information age’. why study education