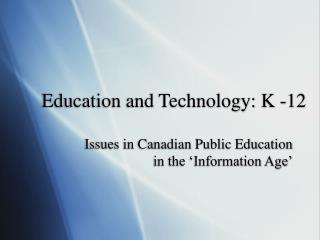 Education and Technology: K -12. Issues in Canadian Public Education in the ‘Information Age’. Why Study Education in 253?. Studying Educational Technology helps us assess the health and wellbeing of public education in Canada.

Issues – K-12 Education - . awareness of and interest in engineering as a profession by the teachers, students,

Technology Evolution in K-12 Education - . from the classroom to the board room . leadership northside presentation

Big Data and K-12 Education - Problem student outcomes in the us and canada lag behind in international rankings, which

Framework for K-12 Science Education - . step 1 in developing the next generation science standards. why do we need new

K-12 Education in Saskatchewan - History and institutional structures : what it looks like and how it got that way. k-12