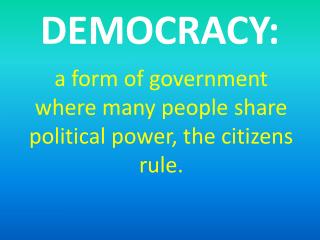 DEMOCRACY:. a form of government where many people share political power, the citizens rule. . Who Can Vote?. Canadians citizens who are at least 18 & have lived in Canada for 12 months before the election date ... BUT it wasn’t always this way. Who Couldn’t Vote in the Past?.

10 An Economic or Spatial Theory of Democracy - . an economic theory of democracy. a spatial distribution of voter