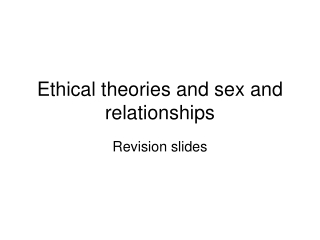 Ethical theories and sex and relationships Ethical theories and sex and relationships

Psychology of Human Relationships Outcomes - . to what extent do biological, cognitive, and sociocultural factors

Ethical Concerns in Nursing Practice - 2. learning outcomes. discuss the concepts of ethics and morality and their

Consequentialist Ethical Theories - . egoism : the good is whatever promotes my long-term interests hedonism : we should