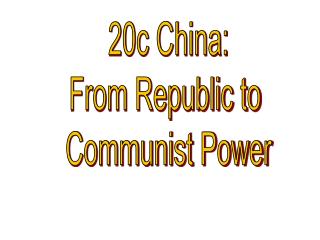 20c China: From Republic to Communist Power. The End of the Chinese Dynasty. The scramble for concessions. The Boxer Uprising in 1900. Peasants in Northern China support from high officials of Qing court destruction of anything foreign siege of the legation quarter in Beijing.

Communist China - . communist revolution. by the end of world war ii, chinese communists had gained control of much of

China Becomes Communist - . a civil war took place in china from the end of wwii until 1949 the two sides (nationalists

Communist China - . china’s last emperor. 1912 – puyi , the last emperor of china, stepped down from his throne. this

Communist in china - . by rodney burdines find on chinese rdigions links. biography. he was born on december 26, 1893

Communist China - . china’s last emperor. 1912 – puyi , the last emperor of china , stepped down from his thrown.