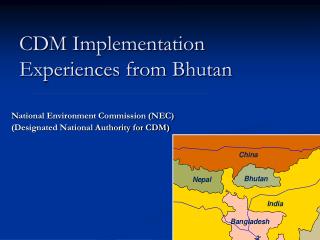 NAPA Experiences From the Kingdom of Bhutan - . bhutan’s experiences with napa. started preparation in 2004 national

Banko from Bhutan - . hello there my name is banko and i live in bhutan. bhutan is a beautiful country in the mountains

Learning from the CDM - . first unfccc workshop on article 6 projects under the kyoto protocol 26-27 may 2004 moscow,

Is the CDM delivering? Experiences in LAC - . christiana figueres for the annex i expert group on the unfccc paris march

Bhutan Photography Tour From www.authenticbhutantours.com - Authentic bhutan tours, we take you to the mystic land of