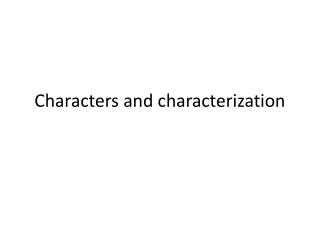 Characters and characterization. All stories have characters. Characters are fictive or real persons that think, act or are acted upon in a narrative The Power of Thermodynamics in the Characterization of Materials - . zeki y. al-saigh department of chemistry buffalo

Internet Traffic Characterization - . amogh dhamdhere. what is covered in this talk…. why characterize internet traffic

Learning About Characters - . let’s begin!. hello there, i’m arthur! my friends and i want to help you learn about