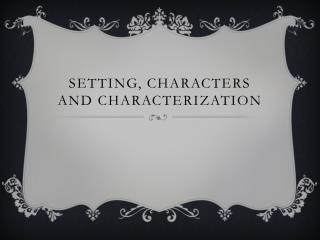 Setting, Characters and Characterization . What is setting?. The setting of a literary work is the time and place of the action It includes all the details of a place and time The year, Time of day Even the weather The place may be a: Specific country State Neighborhood Institution

Literary Elements - . fiction. fiction refers to short stories or books that are not true. elements of fiction. setting

Theme and Characterization - . theme. is the central idea of a piece of literature sometimes called “the moral of the

Setting, Plot, Character - . setting- the time, place, physical details, and circumstances in which a situation occurs.

How Do Characters in Conflict Influence the Plot of a Story? - . feature menu. characterization describing appearance

Plot , Setting and Characterization REVIEW - . what literary term …?. a series of related events in a story. what

Elements of Literature - . plot – the events that occur in a novel, short story, poem, or play. setting – where and

Literary Elements - . exposition. the introductory material, which gives the setting, creates the tone, presents the

Characterization, Setting and POV - . using text and inference to establish place and time and increase understanding.

Story Elements - . keys to understanding. what story element describes the time and place of a story?.