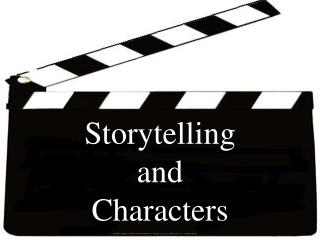 TYPes of Characters - . “zebra” i can analyze how main and minor characters interact and how they affect the plot of

Storytelling - Lee chu keong. storytelling. an arrangement of words and images that re-create life-like characters and

Fairy Tales - . storytelling.….what’s the difference?. a. myth: 1. cultures all over the world tell traditional

Elements of Storytelling - . storytelling– the telling or writing of stories stories-

Writing Module One Clear Narrative, “Characters,” and “Actions - . an introduction to the craft of argument, by

STORYTELLING EXPERIENCES - . once upon a time…. sandman. variety in storytelling. draw and tell media: tapes / cd /

The Creation and Application of Digital Storytelling for All Grade Levels - . ascue 2009 presenters: dr. beth moore