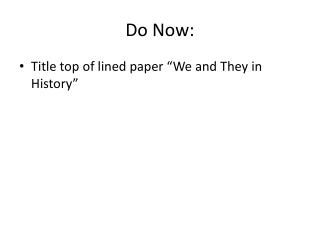 Do Now: . Title top of lined paper “We and They in History” . Opening Question: . Rewrite the following lines in your own words and explain what it means to you personally “Differences between us did not cause hatred; hatred caused differences between us.” -The “In” Group .