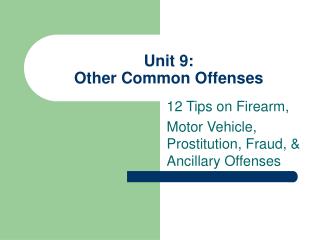 Unit 9: Other Common Offenses. 12 Tips on Firearm, Motor Vehicle, Prostitution, Fraud, & Ancillary Offenses. 1. Firearms Deportability. A conviction relating to a gun or bomb is a basis for deportability. 8 USC 1227(a)(2)(C).

Unit F: Muscular System - . analyze the anatomy and physiology of the muscles. specific objectives: explain the