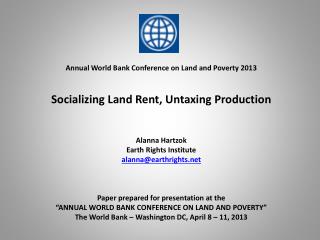 Peopling The Land - . an introduction. from africa?. some believe that humans in the new world have come from africa. the

WORLD BANK Working for a World Free of Poverty - . by: lena drewes. the history. established on july 1 st , 1944

The Evolving Role of the World Bank for Countries like Sri Lanka - . the 25 th anniversary lecture of the centre for