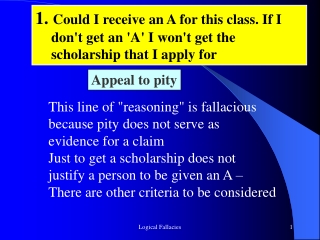 1. Could I receive an A for this class. If I don't get an 'A' I won't get the scholarship that I apply for. Appeal to pity. This line of "reasoning" is fallacious because pity does not serve as evidence for a claim Just to get a scholarship does not justify a person to be given an A –