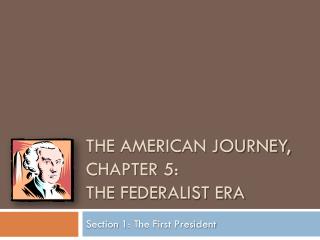 The American Journey, Chapter 5: The Federalist Era. Section 1: The First President. Hamilton vs. Jefferson. Look back at pg. 277. Now that you have historical context, what do you think these quotes mean? Why do these men feel as they do? Whom do you agree with? Why ?. Journey Across the Lifespan - . theories of growth and development text source:: journey across the life span: health

The Journey to Integrated Mental Health/Aging Systems of Care - Presented by lee fraser, ma, rnc, qmhp recognized by the

EMBARKING ON THE JOURNEY TO CONTRIBUTORSHIP - . project goal. to study about how people (contributor) embarking on the