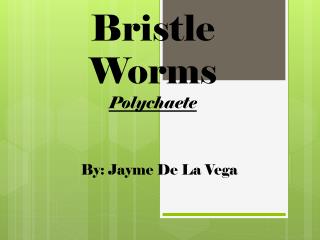 Phylum Annelida Polychaete Worms - . characteristics. segmented bodies each segment has a pair of bristles has a

Bristle - . bristle-verb; to become tense with fear or anger bristle-noun; stiff material , like on a toothbrush jenny

bristle - . by mandy good. bristle. (noun) - a stiff hair like structure. ex. 1 - the bristles of a wire brush are