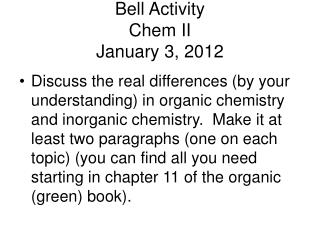 Bell Activity Chem II January 3, 2012. Discuss the real differences (by your understanding) in organic chemistry and inorganic chemistry. Make it at least two paragraphs (one on each topic) (you can find all you need starting in chapter 11 of the organic (green) book).

C: 12 January 2012 - . grab your green folder objective : you will be able to: write correct formula equations for

Chem 261: Inorganic Chemistry - . the elements in the periodic table are often divided into four categories: (1) main

C: 4 January 2012 - . grab a calculator and find your new seat. objective : you will be able to: convert between number