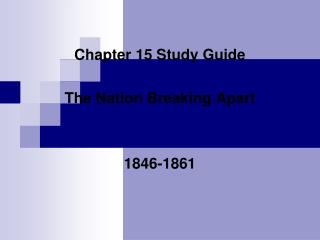 Chapter 15 Study Guide The Nation Breaking Apart 1846-1861. Section 1 - Growing Tensions Between North and South Find Out: How the abolitionist movement heightened tensions between the North and South The controversies over slavery in the territories A merican L iterature End of Course Test Study Guide Condensed Version - . source. this powerpoint is an adaption of the

CHAPTER 19 Vehicle Readiness STUDY GUIDE FOR CHAPTER 19 LESSON 1 Checking Your Vehicle - A. for each sentence below,