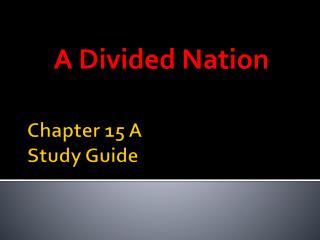 A Divided Nation. Chapter 15 A Study Guide. Fugitive Slave Act of 1850. The Fugitive Slave Act made it a crime to help runaway slaves and allowed officials to arrest those slaves in free areas. Northerners were uncomfortable with the commissioners’ powers.

Chapter 1 Study Guide - Answer the following questions on binder paper following the format shown in class. what do you

Chapter 3 Study Guide - . today’s assignment: for 35 minutes, work independently and silently (without any notes) on

Chapter 12.2 Study Guide - . main idea: american and british forces defeated the germans in north africa and in the

Chapter 4 Study Guide - . written by mrs. koester’s class. adaptation an adaptation of a cactus is having spikey leaves

Chapter 8 Study Guide - . 1) who is alfred wegener and what did he contribute to science?. 1) . wegener was a geologist

Chapter 5 Study Guide - . researching and evaluating internet information. what is the internet? . a network of billions

Chapter 9 Study Guide - . 6 th grade the greek world. 1. who did persia defeat to win its independence from cyrus the