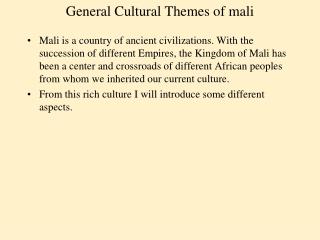 General Cultural Themes of mali Mali is a country of ancient civilizations. With the succession of different Empires, the Kingdom of Mali has been a center and crossroads of different African peoples from whom we inherited our current culture.

Environment of MALI - . by: emu iizuka. 5 theme of geography. location: geographical situation of people and things.

Mali - When where leaders religion trade decline. what famous trading city flourished in mali?. mali. the empire of mali

The Six Themes of AP World History - . the six themes of apwh. interactions in economy and politics. change and

Universal Themes - . important ideas that resurface in story after story…. the great journey. the hero starts out at

Mali - . the spread of islam. introduction. mali was the next great power to rise in western africa after ghana. ghana

Mali Empire - . all gold nuggets belonged to the king but gold dust could be traded . the currency was inconsistent.

The Mali Empire - . by lizt garcia  period 3 . important figures:. religion. the mali empire had an older

Mali - . a story in pictures. the nation was called mali. mali became a legendary empire- a place of power and great

Mali: The general Culture - Mali is a country of ancient civilizations. with the succession of different empires and