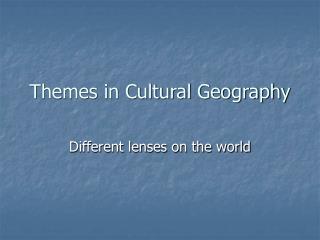 Themes in Cultural Geography. Different lenses on the world. “There is no conversation more boring than the one where everybody agrees.” Michel de Montaigne . Five Themes. Culture Region Cultural Diffusion Cultural Interaction Cultural Ecology Landscape Studies.

The Nature of Cultural Geography - . chapter 1 the human matrix. discussion. pair up into dyads discuss these two