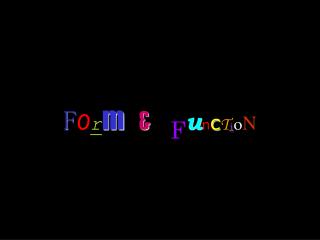 F o r m & F u n c T i o N. What is a skeleton?. A skeleton consists of the bones that make up the framework of a body. Exercise directions. In this exercise, we will be looking at the form and function of different skeletons and how they suit the lifestyle of those animals. Teamwork - . the human body contains about 100 trillion cells. however, no one cell can carry out all the necessary

Unit II - . data and signals: one of the important function of physical layer is to move the data in the form of

Tutorial 7: Using Advanced Functions and Conditional Formatting - . objectives. use the if function use the and function

Process Flow – Form 24G - . 24g to be filed monthly by the pao/dto/cddo to confirm the tds/tcs by book entry reported