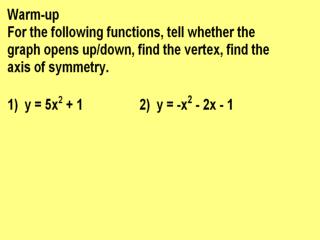 5.2: Vertex Form. How do you graph and apply quadratic functions? How do you locate a quadratic function that is shifted?. VERTEX FORM (RECALL). From a previous chapter, recall that the standard form of a parabola is y = x 2 . Any translation of that graph can be interpreted by:

Shortest Path Problems - . directed weighted graph. path length is sum of weights of edges on path. the vertex at which

Vertex Cut - . vertex cut: a separating set or vertex cut of a graph g is a set s v(g) such that g-s has more than one

2.2 b Writing equations in vertex form - . because the vertex is translated h horizontal units and k vertical from the

Converting Between F orms of a Quadratic E quation - . i. converting vertex to standard form. to convert from vertex to

Vertex Cut - . vertex cut: a separating set or vertex cut of a graph g is a set s v(g) such that g-s has more than one

Measuring angles - . angle: formed by two rays with common endpoint the rays are the sides of the angle the endpoint is

Geometry - . unit 1b section 1.4 angles and their measures. the figure formed by two rays with a common endpoint. sides.

Three forms of quadratic function - . standard form. f(x)= ax^2+bx+c a tells you whether the graph opens up or down, and

WARM UP - . find the characteristics of the following parabola domain range x-intercept y-intercept interval of increase.

Warm-up: - . write the equation of a circle in standard form. identify the center and radius. write the quadratic