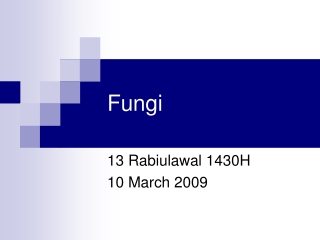 Fungi - . all multicellular fungi have hyphae = tubular growth in a substrate (soil, you etc.). diagram of fungal cell,

Fungi - . cls 212: medical microbiology. mycology: the study of fungi. characteristics of fungi : all fungi are

Fungi - . fungi. the kingdom fungi includes some of the most important organisms, both in terms of their ecological and

Fungi - . fungi are eukaryotes that have cell walls, are heterotrophs that feed by absorbing their food, and use spores

Fungi - . by: danielle noe. what is fungi?. fungi is a group of plants that have no chlorophyll. some fungi have single

Fungi - Are microscopic plants which lack chlorophyll and conductive tissue. they cause: - stem rust - brown rot -