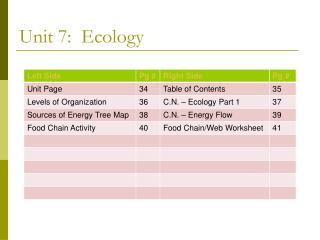 Unit 7: Ecology. Energy Flow. Unit 7: Ecology Chapter 3-2. Energy. The relationship between organisms interaction with their environment is based on energy needs The SUN is the main energy source for life on Earth. Producers. Unit One.Ecology - . a world in a web. science 8 . what is ecology?. ecology(defined) the study of the interelationships

Unit 4: Ecology - . essential questions. what is ecology? what factors affect population sizes and growth rates? how do

Unit 1.1: Importance and Organization of Ecology - . vocabulary. ecology : study of interactions between organisms and

Ecology Unit 40% of the EOC - . what is ecology?. ecology is the scientific study of interactions among organisms and

Ecology Unit - . 2.1 organisms &amp; their environment. ecology what does –ology mean on the end of any word? the

Ecology Unit - . what is ecology?. ecology- the scientific study of interactions between organisms and their

UNIT 9 THE ECOLGOY OF HOLLYWOOD - . 张 andy http://www.tronest.cn. unit 9 the ecology of hollywood. 1. the text is most