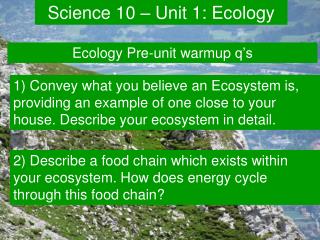 Science 10 – Unit 1: Ecology. Unit 1 – Diversity in Ecosystems. Ecology Pre-unit warmup q’s. 1) Convey what you believe an Ecosystem is, providing an example of one close to your house. Describe your ecosystem in detail.