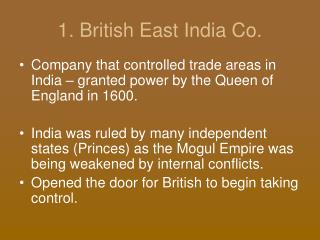 1. British East India Co. Company that controlled trade areas in India – granted power by the Queen of England in 1600. India was ruled by many independent states (Princes) as the Mogul Empire was being weakened by internal conflicts. Opened the door for British to begin taking control. . British Colonialism in India - . what is colonialism?. the policy of acquiring and maintaining colonies for exploitation.