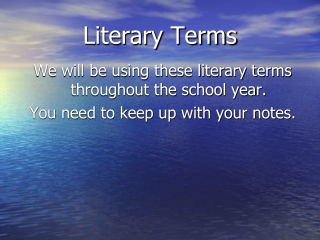 Literary Terms. We will be using these literary terms throughout the school year. You need to keep up with your notes. We will use the following terms:. Character (Characterization) Antagonist Protagonist Author ’ s Diction Imagery Mood Plot Exposition Rising Action Climax