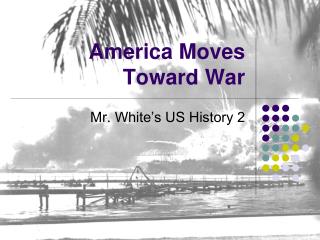 America Moves Toward War. Mr. White’s US History 2. Big Questions. As we discuss the steps the United States took to help its allies before going to war, think about the following:

America Moves to the City - . chapter 25. introduction . by the year 1900, the united states’ upsurging population

Below is a graph of a balls motion. Which of the following gives the best interpretation of the ball’s motion? - . the