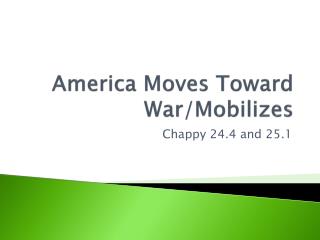 America Moves Toward War/Mobilizes. Chappy 24.4 and 25.1. 1939 – Neutrality Act. US moves away from Neutrality – “Cash and Carry” Warring nations could buy U.S. arms – had to pay cash and had to transport them in their own ships