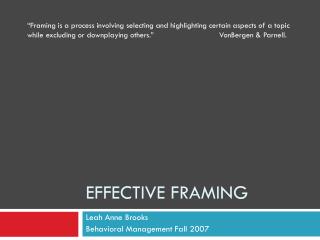 “Framing is a process involving selecting and highlighting certain aspects of a topic while excluding or downplaying others.” VonBergen & Parnell. Effective Framing. Leah Anne Brooks Behavioral Management Fall 2007. Framing…What can it do for me?. Framing:

Framing - . what is framing?. how you arrange the stage of a performance and how specific actors are situated in the play

FRAMING: - . framing —deciding where an image begins and ends — is as vital to the meaning of an image as

Framing Questions - . what is gamestorming ? how can i use it to improve collaboration in a pbl context?. logistics.

Framing Organizations - . a quick synopsis. organizational problems require flexibility in how they are diagnosed, and

Framing - . constructing claims. types of frames. diagnostic—identify the nature of the problem (i.e., what

Framing Questions - . who and/or what are the authoritative figures that govern each society? how do the characters

Framing - . views through windows, doors etc. answer the following: why is composition important? why would a