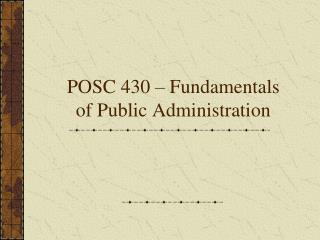 THE REVIEW OF PUBLIC ADMINISTRATION - . reform of the health and social services next steps. no 10 principles of reform.

Definitions of Public Administration - . in simplest terms, it means government in action. . definitions of public

POSC 3315 - . w12-2. history. why history matters path dependence what it means how it works “off-path” changes

Fundamentals of Public Relations - . public relations have evolved from being simplistic to a more innovative function