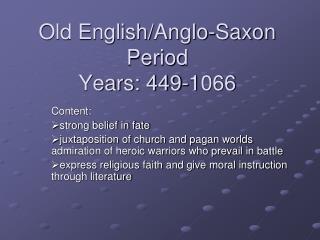 THE INTER-TESTAMENTAL PERIOD - . 400 years of history in ten minutes. life under the greeks. alexander the great dies in

Anglo-Saxon Weapons and Armor - . by bo echols. the spear. t he main weapon of the period the spear was used by warriors