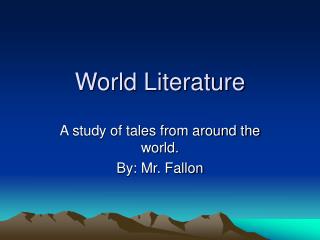 World Literature. A study of tales from around the world. By: Mr. Fallon. Some Advice About Notetaking. Summarize with key words, important bits of information, and headings. Do not copy verbatim (word for word).

Yiddish Literature - . in the “old world” a nd the “new world”. the early stage. the language of daily

World Literature 2/25/13 - . today you will review homework (to pg. 444) character and theme quotes meet the natives

World Literature - . wednesday, october 12, 2011. turn in signed “avoiding plagiarism” form if you have not already.

Honors World Literature - Week 33. honors world literature. clear your desk of everything. you will have 9 minutes to

World literature - . friday april 22nd. warm up. memorization check take out a sheet of notebook paper and label it with

World Literature - . book 12 sirens and sea monsters. warm up choose one of the following:. option 1. option 2. is